It’s Woo Sox at IronPigs. Again. Check out my mid-season report (here) if you haven’t done so already. Read on for everything you need to know about this latest home-stand, as we begin the second half of the IronPigs 2021 campaign. 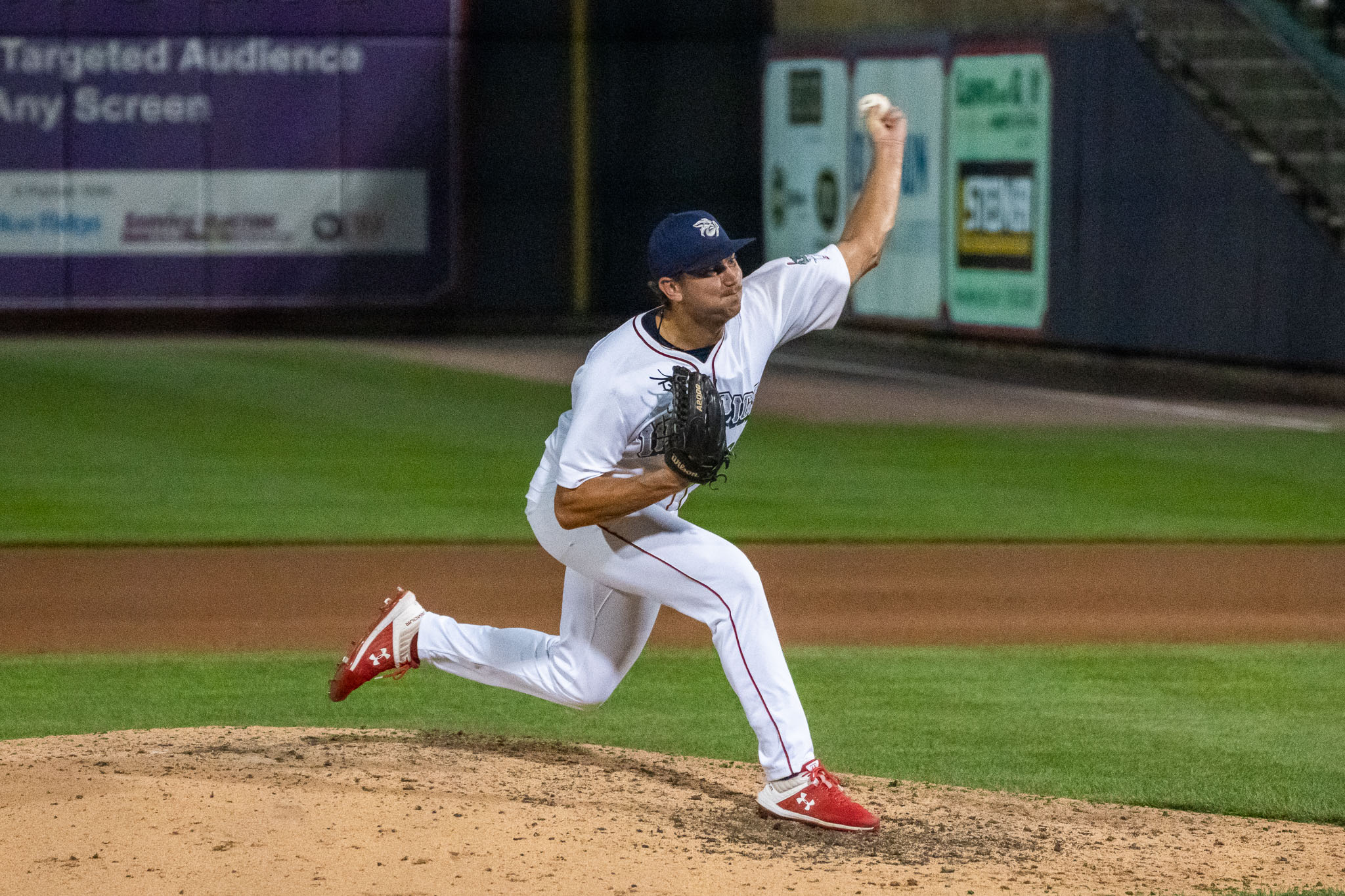 The IronPigs have been good host for the nascent Worcester team. Indeed the Red Sox affiliate has gone 6-5 thus far this season at Coca Cola Park. This will be their third series (in the past five home-stands) in Allentown. A look at the schedule, though, would tell you that it’s their last–BUT WAIT THERE’S MORE!  A bonus five-game set was added, September 29 to October 3, as a sort of pseudo-playoff in which all teams participate. I don’t understand it either, but it gets each team five extra openings, and keeps the AAA players sharp in case they’re needed for the playoffs. These days, when “rosters expand” it’s only two extra players to the big leagues in September. In any case, the Woo Sox are wearing out their welcome with me.

Another thing that’s not leaving us any time soon is the COVID-19 virus. The Phillies got hit by an infection (3B Alec Bohm) and subsequent contact tracing (Connor Brogdon, Bailey Falter, Aaron Nola, due to low vaccination rate among the team and field personnel) which cost the IronPigs four players (Nick Maton, Damon Jones, Mauricio Llovera, Cristopher Sanchez ).  In addition, the IronPigs kids camps had to be cancelled due to low vaccination rates among the AAA players and field personnel. There’s nothing a Triple-A player wants more than a promotion to the big leagues–hard to make the club when you’re in quarantine. Just saying.

Wait, did I just conflate the Woo Sox and the COVID virus? That’s probably a bridge too far. But neither one appear to be leaving us any time soon.

The IronPigs pull into this series at 27-38, just barely in fifth place behind Rochester in the AAA-East/Northeast division. The Woo Sox are in third place, 6.5 games back of first-place Scranton.

The last home-stand, yes versus this very Boston affiliate, saw the IronPigs lose game 1 in an uncharacteristic poor outing from Cris Sanchez. Game two was a win behind the solid pitching of RHP Mark Appel, and Nick Maton’s three RBI. The third game was rained out–to be made up this Saturday. Friday’s game was a loss featuring a rehabbing Chase Anderson, perhaps “not worried about the results.” The Pigs came back on Saturday, though, with a 9-1 win in a Spencer Howard start, as Mickey Moniak and Nick Maton added doubles. Sunday afternoon closed out the 3-2 series win behind six strong innings from newcomer Tyler Alexander.  It was the first IronPigs series win in quite some time.

With no such thing as an All Star Break in the minor leagues, the IronPigs shuffled down to Trenton. The roster havoc began to take it’s toll as the ‘Pigs went 1-5, their lone win coming in a game delayed overnight by rain that Spencer Howard started. So much for momentum following the home series win.  The bats really came alive, though, in the Howard start as they pounded out 15 hits and crossed the plate 12 times. Mickey Moniak and Dalton Guthrie were the superstars at the plate, but the entire lineup chipped in one way or another. 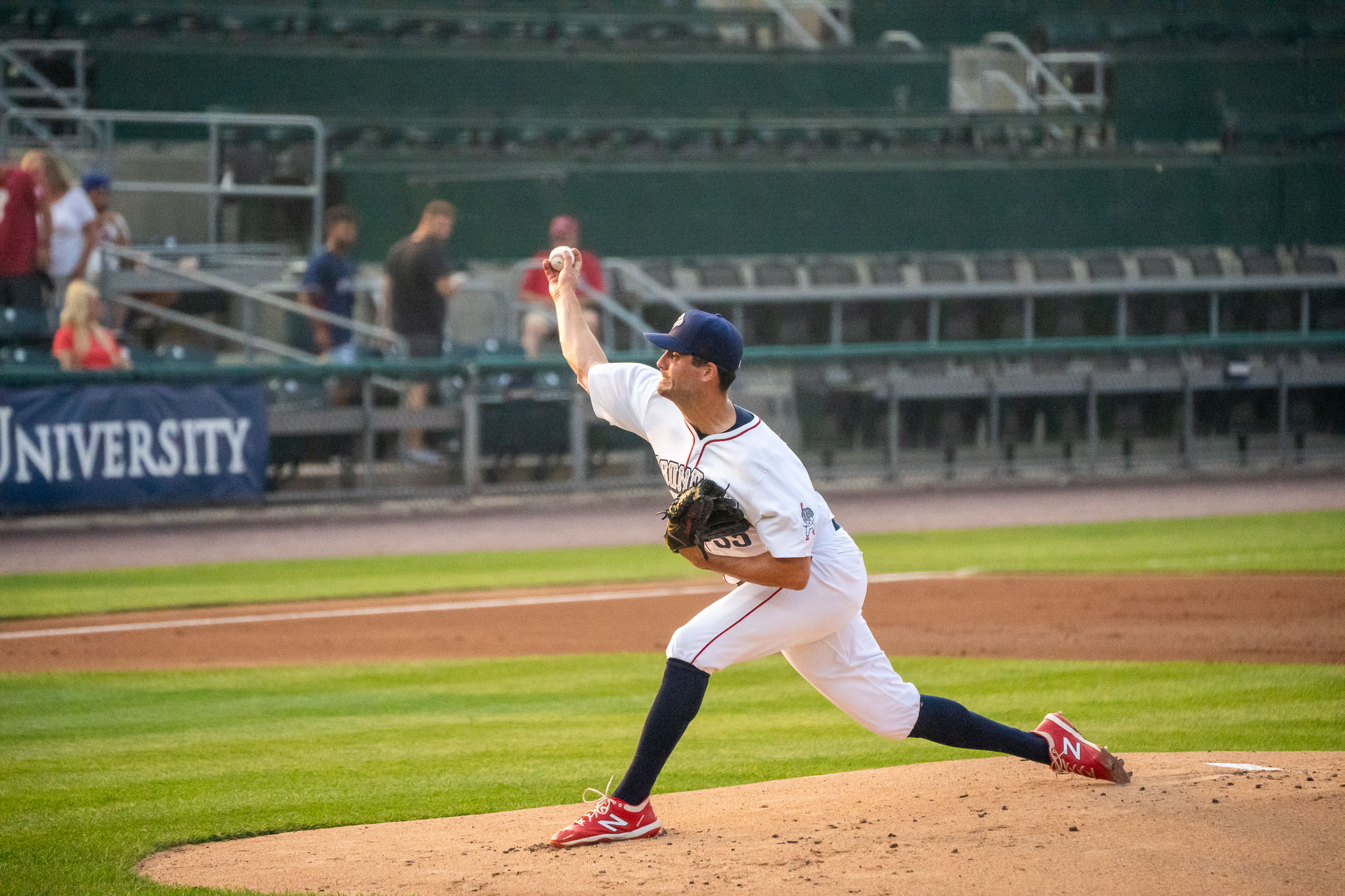 RHP Sam Coonrod made a rehab start Sunday in Trenton

OF Matt Vierling and RHP Mauricio Llovera returned to the IronPigs on Saturday, after having been called up amid the COVID-list additions in Philadelphia.

RHP Ramon Rosso was added to the Temporary Inactive List, likely supporting the Dominican team in the Olympics

RHP Julian Garcia was added to the IronPigs roster, from Reading, on Friday

2B Scott Kingery was transferred to the 60-day Injured List, later reported having had surgery to repair a torn labrum in his right shoulder. He will aim to be ready for Spring Training, 2022.

RHP Ethan Evanko is on the Injured List. The nature of the injury is not known.

RHP Cam Bedrosian, C Tyler Heineman, and LHP Tyler Alexander joined the team during the last home-stand, in case you missed it.  Meanwhile, RHP JD Hammer had his contract selected by Philadelphia.

[UPDATE]  Just before game time on Tuesday, RHP Mauricio Llovera and OF Mickey Moniak were summoned to New York to replace new COVID-list Phillies LHP Bailey Falter and RHP JD Hammer.  More moves Wednesday:  Moniak has returned to the IronPigs, Spencer Howard was recalled to assist with bullpen game Wednesday in New York vs the Yankees. 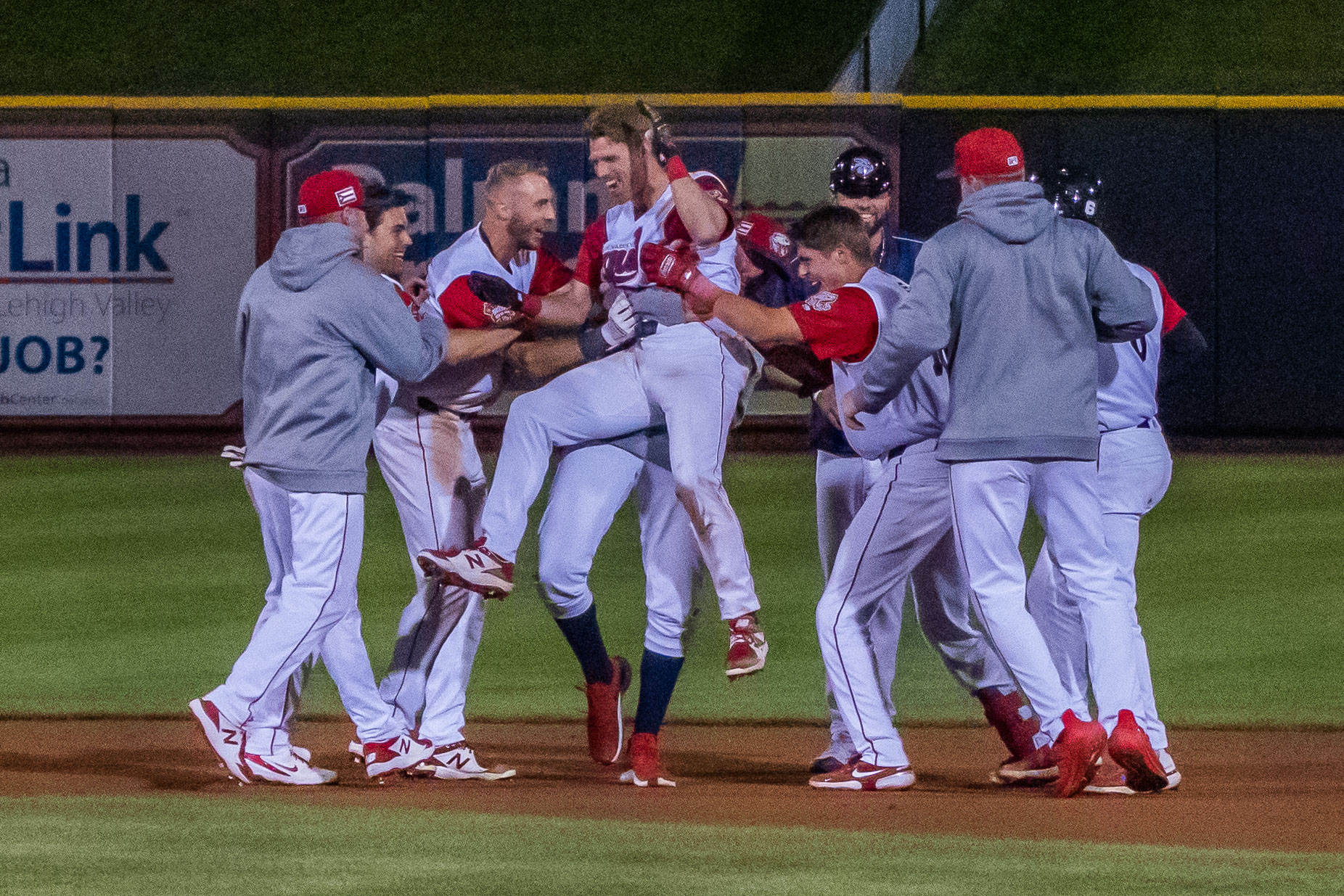 The weather looks favorable for this week–at least as of now. Good seats still remain for all of these games.

Roster changes could impact these, but here’s how it maps out right now:

Wed: Mark Appel [Howard now listed, on short rest.  But he was called up, so…]

[UPDATE]:  With the Injured List addition of RHP Zach Eflin and the COVID status of JD Hammer and Bailey Falter, the Phillies will throw a bullpen game on Wednesday, with Moore and Velasquez set to start the first two games of the Atlanta series at home, Thursday and Friday respectively.  Spencer Howard was recalled for Wednesday’s game in New York; we’ll continue to update. 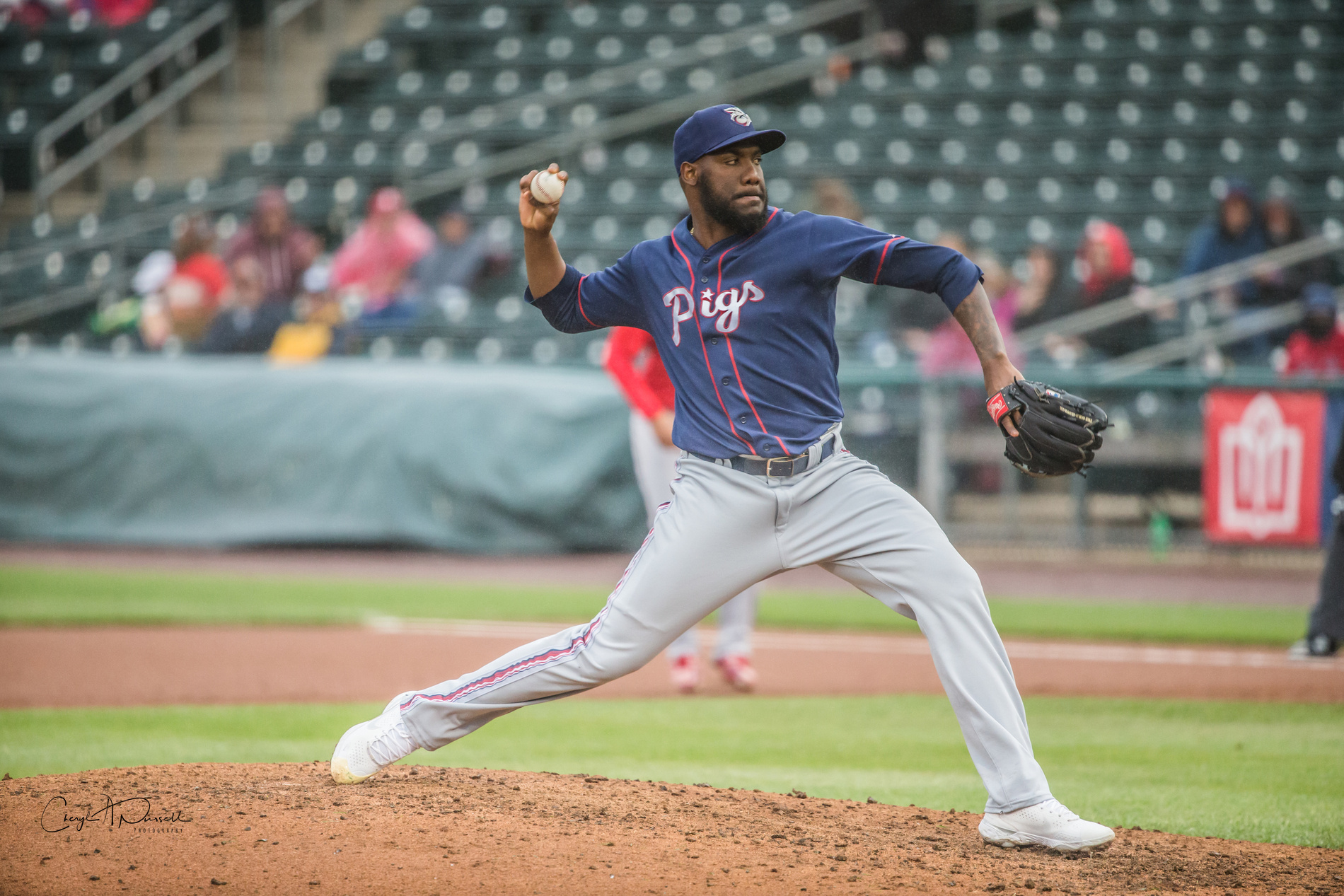 Opinion:  The Phillies and Some Revisionist History

The Phillies lost a player to trade this week in RHP Victor Santos, who was pitching reasonably well with AA Reading. I saw him in person last Wednesday versus Portland, the Red Sox affiliate, and he did fine. He was not overpowering and gave up four runs in six innings of work. He doesn’t have any loud tools and his notable pitch is a split/change. And while he’s only 21 years old, there’s not a lot of projection in his pitches for the big leagues, but he could be a back-end starter or a middle reliever going forward but it’s a profile based on command and control over pure “stuff.”

The trade in question, though, was not a new one. It was the trade from January 18 that saw the Phillies grab potential Red Sox roster-casualty SS CJ Chatham, for a “player-to-be-named” or cash. Most of us had long forgotten the trade, or maybe thought that the cash had already changed hands. Usually, in these cases, there’s a list of potential players who could be selected later, and if the other team doesn’t like any of them, they just take the cash. In this case, Santos was evidently on that list, despite being a potential useful farm-hand and young enough to still progress through the system.

Phillies GM Dave Dombrowski took heavy criticism out on the inter-webs for this trade outcome.  And while a critical eye is certainly warranted, many were forgetting the chain of events that led to the trade in the first place, and were also filled with the recency bias of events that have happened since January 18.

Let’s go back to December:  The Phillies hadn’t settled on a General Manager yet, Didi Gregorious was a free agent, and JT Realmuto was the number one target of Phillies management, fans, and teammates.  As far as the middle infield, journeyman Ronald Torreyes was under a minor league contract.  Jean Segura and Scott Kingery were expected to fill other positions (2B and CF, respectively).  Luke Williams hadn’t played above AA, where he spent most of 2019 at 3B.  Nick Maton had only played half a season at AA, where he mostly played 2B.  Neither looked like they were shoving the door down to the big leagues, while playing at the alternate site in 2020.  Arquimedes Gamboa had a difficult year in AA in 2019 and was removed from the 40-man.  Middle infield depth was needed for both the big league team as well as the AAA team.

On December 10, the Phillies selected INF Kyle Holder from the Yankees (SWB) in the Rule 5 Draft.  That selection carries with it an MLB roster requirement.

On January 18, 2021, the Phillies traded for INF CJ Chatham, with Boston.  Boston is the last club to employ Dave Dombrowski.  Chatham was, perhaps, a player Dombrowski liked more than Kyle Holder.  He was familiar with him, at least, making Chatham a bit of a safer bet.

On January 30, the Phillies re-sign SS Didi Gregorius, making some of the depth unnecessary.

And since then, of course, Holder was sent back to the Yankees (where he’s hitting .211 with SWB), Williams and Maton have proved their mettle in Spring Training, at the April Alt Site, in AAA and in MLB.  Scott Kingery couldn’t hit.  Then, tore his labrum.  He’s out until next year.  CJ Chatham was removed from the 40-man, stuck around to play in Triple-A, and then broke his hand.  He’s on the IronPigs Injured list, but could return.  Victor Santos, in four starts at AA, was 1-1, 3.05, 4 BB, 15 K, .227 BAA.  He didn’t pitch at all stateside in 2020.

So I get it.  But it wasn’t like accidently leaving Domingo Santana on the list for the Astros.  Dombrowski maybe over-paid for a player he knew, but the context at the time, depth was needed at an up-the-middle position, and a single-A pitcher who hadn’t pitched in a year was included as a possibility.  There was a lot of over-reaction this week, and a lot of forgetting what has happened since then.  Hindsight is an easily correctable refractive error.

What To Watch This Series

The IronPigs will be off to Rochester after this home series, then return the following week for Buffalo.  Buffalo from New York, not Buffalo from Trenton, NJ.  Life moves fast.