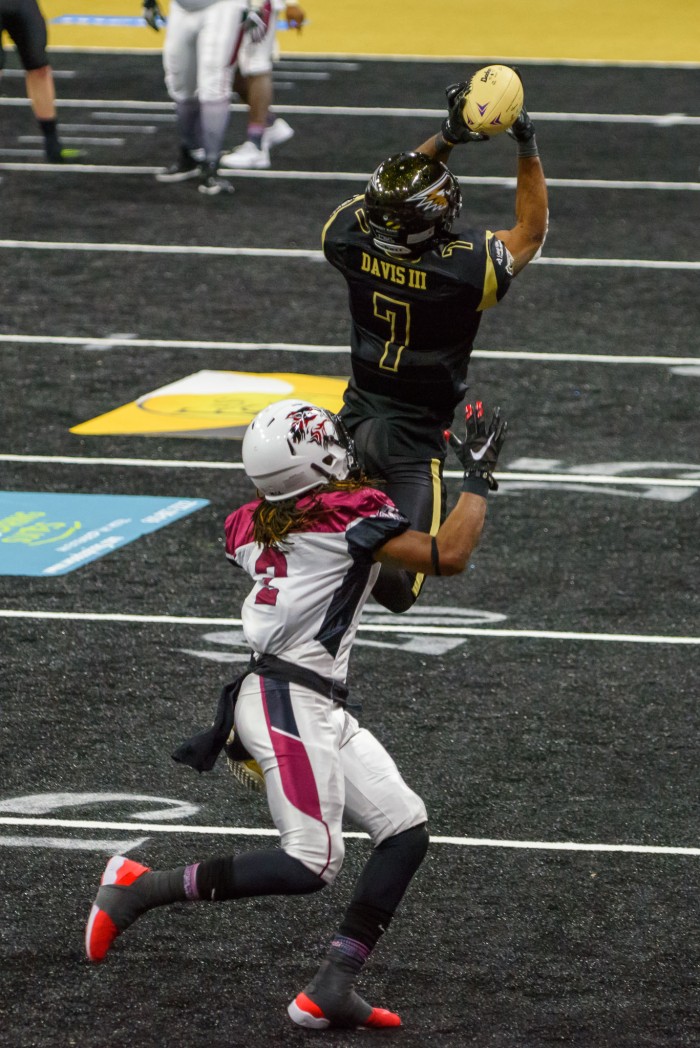 The Lehigh Valley SteelHawks will look to close out their 2017 regular season home schedule at the PPL Center this evening by “three-peating” against the High Country Grizzlies.  Kickoff is at 7:05PM, doors at 6:00PM and good, reasonable seats are still available.  A rally towel giveaway is planned for the first 1,000 through the gates.  Halftime will be presented by Pocono Mountain East Marching Band.

With a win tonight, the SteelHawks will clinch their first ever HOME playoff game.  The team has made the playoffs in every single season save one–but has never had the advantage of playing on home turf.  They look to make that a reality at the PPL Center this evening.

While the SteelHawks have defeated the Grizzlies twice thus far in 2017, this game is the “Larry Ford revenge game” as he makes his return to the valley as a member of the Grizzlies.  Watch for him to attempt to cause havoc for ‘Hawks slinger Warren Smith Jr.

Also watch for friend-of-the-nation Ryan, who will be an honorary captain today, as well as an assistant coach.  It might be the return of Larry Ford, but this game is also the return of “RyRy.”

Here’s more about the game from the team in their official game preview:

The Lehigh Valley Steelhawks (7-1) face the High Country Grizzlies (3-5) for the third time this year. The Grizzlies are making their first trip up to the Valley. In what is the final regular season home game for Lehigh Valley, the game will kickoff at 7:00pm on Saturday, June 3rd. The game is being brought to the fans by Capital Blue Cross and will feature the first 1,000 fans receiving a FREE Rally Towel.

After a narrow victory early in the season, the Steelhawks took round two more decisively, never trailing in the game. The Steelhawks clinched a NAL playoff berth when they defeated the Grizzlies in North Carolina two weeks ago. The Steelhawks have been clicking both offensively and defensively the last four game weeks. The most efficient offense in the league is led by QB Warren Smith Jr. (66% completion, 1,638 yds, 45 tds) and WR Darius Prince (50 catches for 617 yds).  Smith Jr. leads the league in passing yards and touchdowns; Prince’s 16 receiving touchdowns are good for second in the league. After allowing six sacks in their first matchup, the Steelhawks offensive line of Shawn Lockett, Bret Piekarski, and Curtis Nealer didn’t allow a single sack in round two of the season series and have only given up two sacks in the last three games. On the flip side, the Steelhawks defense has tallied eleven sacks in the past three games – Tim Hume leads the team with six of those sacks. The secondary has been ball-hawking all season, recording at least one interception in each game – DB Rodney Hall Jr. (6 ints) had the lone pick the last time these teams met.

High Country has relied on a strong ground game this season. FB Undra Hendrix is the league’s leading rusher (281 yds), averaging 35 yards per game and has 11 touchdowns; but the Steelhawks defense held him scoreless and allowed just 16 yards in their last game. They have a veteran quarterback under center in Stephen Panasuk (1,364 yds, 31 tds), whose favorite target has been Malachi Jones (54 catches for 546 yds) who has 14 touchdown receptions on the year; he had two touchdowns in the last game against the Steelhawks. The Grizzlies defense is led by their defensive line – Brandon Sutton (7.5), Larry Ford (7), Adrian Blackburn (4.5) – who are all in the top ten for sacks.

It is always difficult to defeat a team three times in one season, and this will be no exception. The battle in the trenches will be key to gaining an edge. The Steelhawks need to stay focused and continue to do what has gotten them to this point as they prepare for the post season. A win on Saturday night will give the Steelhawks their first ever HOME playoff game. After wrapping up the regular season in Georgia on June 10th, the ’Hawks would have a week off to prepare for the first round of playoffs. If the game is in fact in the Valley, it would be Friday night, June 23rd at 7:30pm on Embassy Bank Field inside the PPL Center.

Playoff tickets are on sale now. To reserve your seat for a possible home playoff game June 23rd fans are urged to call the Steelhawks office at 610-282-3100. Keep checking for the latest news and events from the Steelhawks. For further information please call Lehigh Valley Steelhawks Executive Vice President and General Manager Mike Clark at (610) 282-3100, or visit our website at http://www.LVSteelhawks.com for the latest Steelhawks news.